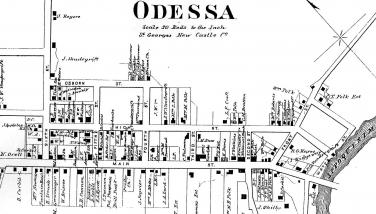 In the period between 1830 and 1860, the population of the State of Delaware struggled, internally, between powerful slave interests and defiant and very vocal anti-slavery groups. Slavery was not abolished in Delaware until the end of the Civil War, yet Delawareans voluntarily manumitted a greater percentage of their slaves than most other northerners. In addition, Delaware, and specifically the Middletown/Odessa area, had a large and dedicated population of Quaker and Methodists who were calling for an end to the institution of slavery.

In 1776, the Philadelphia Yearly Meeting of the Society of Friends called for all Quakers to free their slaves. Odessa/Middletown residents, Daniel Corbit, John Alston, and John Hunn were quietly recognized as agents of the Underground Railroad. Although Corbit was not openly an abolitionist, he did act on behalf of both slaves and free Blacks.

Years later, his daughter, Mary Corbit Warner read a story related to her family’s participation in the underground railroad at a March 1914 meeting of the Delaware Society of the Colonial Dames of America. She related a family story that described an escaped slave named Sam who approached the Corbit home begging for refuge. He was taken into the house and hidden in a cubby hole in the attic by her mother, Mrs. Daniel Corbit (Mary Corbit Wilson Corbit). There, the runaway was given food and a warm quilt and hidden while a sheriff's posse searched the house. Sam was not discovered and was able to make his way, at dusk, north to Philadelphia and later to freedom.