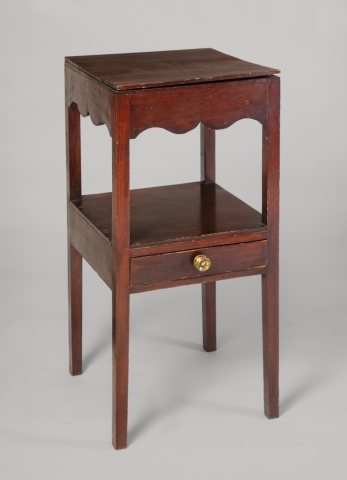 Simple, utilitarian furniture generally received less care and concern over the generations and, accordingly, seldom survived to the present. Fortunately, this washstand not only survived but bears an inscription of its maker, thus preserving part of its history. James Henry Stevenson, “Maker,” was the second son of Dover cabinetmaker Thomas Stevenson (1787-1865), who also trained him in that trade. Traditionally, apprenticeship bound a young man to a master for about seven years until he reached adulthood at age twenty-one. Practically, and increasingly through the 19th century, trainees began earning their own wages sooner. It is probably that no formal arrangement existed between James and his father. Regardless, he made the washstand in his eighteenth year (he was born on December 23).

The stamped brass pull is a replacement.