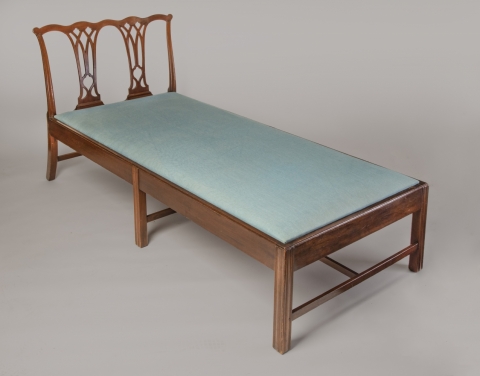 William Corbit’s 1818 estate inventory listed a “couch & mattrass” in the “Back room North corner” on the first floor.  It was valued at $12.00, a relatively large sum equal to a set of six mahogany chairs in that inventory.  This couch was among the “Residue of Household Goods of Wm. Corbit, decd.,” valued at $1.00 in 1845 among the property of Sarah C. Spruance (1795-1860) and Daniel Corbit (1796-1877), William’s only living children at that time.  Terminology in use at the time suggests that the couch was this object and not a sofa with a cushion.

The present legs, rails, and stretchers are all replacements.  The rear leg replacements are spliced into old rear stiles above the seat rails. The back is the only late 18th century part that survives intact.