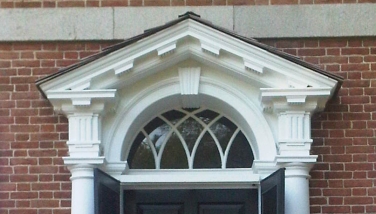 Georgian houses displayed a strict symmetry with a paneled door as a centerpiece capped by an elaborate crown or pediment. 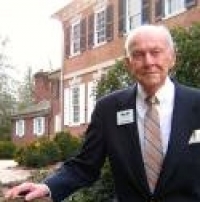 Ted graduated from St. Lawrence University and attended the Columbia Graduate School of Business. He served in the United States Army as a Military Police Officer and for the next thirty-one years worked for IBM. During that time he fulfilled a Public Affairs Fellowship at the Brookings Institution where he developed special programs while assigned to the U.S. Treasury Department. After retiring from IBM, Ted started “Ted Rowe Associates” writing, producing, and directing industrial videos for major corporations including IBM.  While in college and in later years he worked as a professional musician in New York, and as host at a radio jazz program for Texas Christian University in Fort Worth, Texas.

Ted joined the HOF Volunteer Organization in 2005, just after the foundation took over ownership of the Odessa properties. He was one of the first fully trained docents providing guided tours of the museum buildings and collections. From the beginning, Ted’s inquiring mind and active thought process brought dimension to the visitor experience. Ted has edited and written some of the foundation’s training materials, created and produced an illustrated walking tour of the Odessa historic area, and brought his professionalism and scholarship to institutional guiding policies.

Ted is a loyal and dedicated volunteer. We are very grateful to him for his tireless commitment assisting in our efforts to keep this very important Delaware State treasure open to the general public.

Ted and his wife Phyllis live just across the Appoquinimink!  If you would like to meet Ted you will find him working most Thursday’s at our Visitor’s Center located in the historic Odessa Bank on Main Street. Please stop in for a visit where you will be warmly welcomed by Ted and all of the HOF volunteer staff.