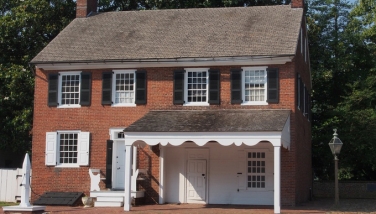 The wood water pump in front of the Historic Pump House c.1780 is indicative of the public nature of the center of town. 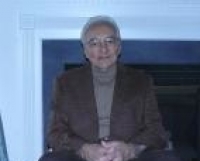 His name is Salvatore Scarpignato, but around Odessa everyone knows him as Sam.  He is one of those special people that you feel like you have known forever.  Sam is friendly and outgoing and always ready to assist anyone with anything, you needn’t ask twice!  He is the go to guy you can count on, a Site Volunteer at the Historic Odessa Foundation, and a real jack of all trades.

You can find Sam all around the museum… working as a Sous Chef for his lovely wife June in the Collins-Sharp House on hearth cooking days… stuffing bags for school programs… helping punch holes in leather tags for one of the many children’s activities… working in the gardens… and… he will move everything from tables and chairs to Christmas Trees without complaint! One of  his special talents… as a lock smith… has had him working on the sites many keyed entrance doors fixing locks and grinding new keys for doors that have been in use well over two hundred years. To sum up Sam… in the words Ted Rowe…his friend and fellow volunteer… “Sam is one of the most, hard working people I know. He is always the first to show up to help…he would give you the shirt off his back”!

The foundation is grateful that June and Sam chose to participate in our very first Community Open House, October 1, 2005. They just stopped by to check out what the Historic Odessa Foundation was all about, enthusiastically signed on…and they have been volunteering ever since!

Salvatore Scarpignato was the youngest of seven children, born and raised in Philadelphia, Pennsylvania. He graduated from Bok Vocational Technical High School in 1952.  Just after school Sam worked as a material handler at the Walter P. Miller Box Company.  Then in 1956 he was drafted into the Army. Sam trained for six months at Fort Hood, Texas, and was stationed in Germany from May, 1957 to September, 1958. After fulfilling his Army service he came home to Philadelphia and returned to the Miller Company as a machinery mechanic for the next thirteen years. Meanwhile…Sam began studying for the Civil Service Exam, mastering and successfully passing the exam in 1969. Almost immediately he was hired by the city of Philadelphia’s Department of Recreation as a building maintenance mechanic. In 1982 he took another civil service test and was promoted to Maintenance Supervisor, finally retiring in 1989 after twenty years service to the city. Sam’s secret skill as a lock smith was acquired through a correspondence course and when it was discovered in passing conservation by department management it led to a new position being created within his department. The end result…he was quickly fixing locks on doors all over the City of Philadelphia!

Some of Sam’s favorite things…watching football, particularly the Philadelphia Eagles…he says…”growing up in Philly kids played football and stick ball in the streets…we used rolled up newspaper tied with string as a football”; he loves music… from the 40's, 50's, and 60's…especially “old blue eyes”, Frank Sinatra; Sam likes to dance; watch movies; go to shows; and travel throughout Italy; he loves being around family and friends; and eating at Cantwell’s Tavern; but… most of all “I really just enjoy doing everything with June”.

If you don’t know Sam, make it a point to meet him.  You will make a wonderful new friend indeed!