Lecture: "Red Where? From Wheels to Kilns to Kitchens"

Today, we call it redware but early local potters advertised it as earthenware. The red color of this relatively low-fired ceramic is the product of burning clay bodies high in iron. Typically wheel-thrown and fashioned into a variety of forms, these wares were used to store, prepare and serve foodstuffs.
Before loading their kilns, potters occasionally decorated some of their redware using techniques such as incising, sponging and slip trailing. Most redware was then glazed, at least on the inside, to prevent its porous body from absorbing the characteristics of the food or liquid being handled. Lead-based glazes were the most common and, in part, eventually led to redware’s demise.
Early potters fired two types of wood burning kilns. The entire cycle from loading to unloading could take a week. Stacking of the pots and the heating and cooling phases were critical steps in a successful kiln firing.
Potters sold to the public from their pot shops, especially those who were located in cities and towns. Rural craftsmen loaded their horse-drawn wagon and traveled the country side sometimes spending two or three days marketing wares. Some of the more prolific potters shipped by rail or water.
Operating a pottery was hard work. Pots sold for pennies. Few potters became rich. In fact, longevity was not a characteristic of many pot houses. A second source of income was vital to many.
The collection of the Historic Odessa Foundation holds a number of examples of nineteenth century redware. Now on exhibit, some of these objects will also be used during the lecture to tell the story of these wares and the techniques employed to produce and market them.
About the Speaker
James R. Koterski was born and raised in Chicago, Illinois, and holds a Ph.D. degree in organic chemistry from the University of Iowa. Following graduate school, Jim joined the DuPont Company where he held a number of management positions in manufacturing, marketing, and research and development. In retirement, he has continued to pursue his interests in early Americana. Catalyzed by a quest to learn more about the potter, William Hare, and others, his earlier research resulted in a book titled Early Potters and Potteries of Delaware: Historical and Commercial Perspectives, 1760 to 1890, published in 2005. His second book, Potters and Firebrick Makers of Cecil County, Maryland, and Nearby: 1750-1950, was completed in April, 2011. Jim has lectured and led numerous workshops on the subjects of American stoneware and redware, including several occasions at the Winterthur Museum, Garden and Library, and the Brandywine River Museum and local historical societies. Jim and his wife, Sue, reside in Chadds Ford, Pennsylvania. They have three daughters and four grandsons. 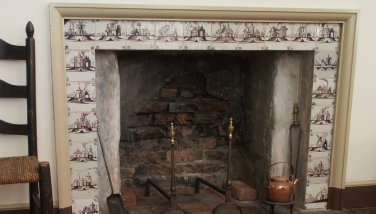 This Philadelphia-Georgian style is featured prominently throughout the Corbit-Sharp house.