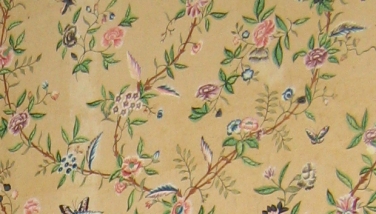 The wallpaper in the Corbit-Sharp House (c. 1774) is a rare example of hand-painted Chinese wallpaper.

Exhibit: Potpourri of the Palette: Watercolor Paintings by Linda Hall

The art exhibit will feature some of the award winning artist’s vivid flower still life watercolor paintings and light filled landscapes.  Hall has participated in numerous juried art shows and has received many awards for her imaginative artwork.  Many of Linda Hall’s art subjects come from her bayside village of Betterton, Maryland, similar in size to and just thirty miles west of historic Odessa.  Here the artist has been inspired by the wonderful light and shadow on the local nature, fields, and water that comprise most of her compositions.  Reconnect with your local historic museum to observe the wonderful collection of paintings by this talented neighboring artist.

Linda King Hall moved to Kent County, Maryland from Bucks County, Pennsylvania in 1997.  She makes her home in Betterton.  Originally from Ohio, she is a graduate of Ohio University where she was tapped into the Art Honorary Society, Delta Phi Delta in her sophomore year.  She received a Bachelor of Fine Arts degree with a major in graphic design and a minor in Art Education.  She has taught Art K-12.  She studied with internationally known painter, illustrator, Charles Reid, for three years in Westport, Connecticut.  She has also studied at the Silvermine Guild of Art in Norwalk, Connecticut, and has taken workshops with many nationally known artists.  After taking two courses in graphics at Fairfield University in Connecticut, she worked with advertising agencies and design studios the past 15 years before her move to the Eastern shore.

She is still freelancing in graphic design, pen & ink renderings, and oils and watercolors. Since her move to the beautiful Eastern Shore with its wonderful light, she has more time and inspiration to focus on painting. 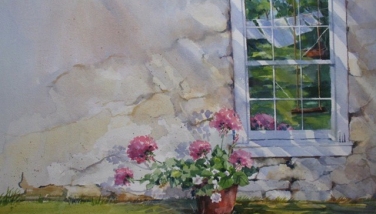