H. Rodney Sharp collected maps and displayed them in his home, “Gibraltar”, in Wilmington. His particular interest focused on North America and the mid-Atlantic region, and many of these maps were acquired by reference to 18th century William Corbit inventories for display in the National Historic Landmark Corbit-Sharp house restored by Mr. Sharp.

Additional maps have remained in the Sharp descendant families and are on loan for this exhibit. Reproductions of some of these maps also may be seen in Cantwell’s Tavern.

The History of Map Making

Truly the earliest “maps” are of stars painted on the walls of the Lascaux caves dating to 16,500 BC. The evolution of cartography has been critical to understanding our planet and its place in the cosmos. Making maps requires tremendous effort, money, courage and sacrifice.

The exploration behind making maps has built empires and destroyed countries and cultures, has been central to world trade and economics, invention and industry, as well as solving mysteries and introducing new species. How could we have arrived at the 21st century without these wonderful maps and all that they tell us about our past?

This exhibit will be displayed at the Visitors Center and is free to the general public. Reservations by appointment January and February. 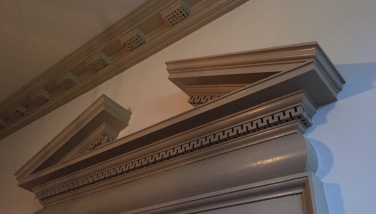 The interior cornice in the Corbit-Sharp House with mutule blocks is a Georgian feature borrowed from Greek Doric architecture. Mutule blocks can also be seen in Philadelphia’s Independence Hall.